“Warning” should be omitted as there is a false sense of security and an unreasonable emphasis placed on the red core yarns by uneducated sling users and inspectors.   Red Core Yarns are not a viable inspection device. By the time the red core yarns become visible; the sling should be rejected and removed from service.

It is important that sling fabricators and safety professionals put the proper emphasis on the red yarns. In our Resource Guide, warning sheets and warning tags, the red core yarns are listed, but are placed at the end of the removal from service criteria.

Too much emphasis is put on the singular importance of the red core yarns in the inspection process. How many seasoned sling users can repeat the limerick that unfortunately is a part of our safety culture, “If I see red, I’m going to be dead”?  So the reverse logic, “If I don’t see red, I get to go home and watch “Dancing with the Stars” makes sense?

When taken in isolation red core yarns will not serve the user or the rigging industry well. We have always instructed responsible sling users and inspectors that if the red core yarns are visible do not use the sling. However, slings can become extremely dirty, making red core yarns difficult to see.  Serious damage can also be present without red core yarns being visible. Our advice has always been, if there is damage WITHOUT the red core yarns visible, DO NOT USE THE SLING.

Safety and training professionals MUST send out the correct message by providing the proper perspective on red core yarns. Students must not leave a training session with the idea that all they need to look for and be aware of are red core yarns. Get your mind right and visit our web site http://www.lift-it.com and obtain additional information on the right perspective to have when it comes to sling webbing vs. tie down webbing and the overrated value placed on red core yarns.

In the 1990’s an article was published stating that synthetic slings lose strength, strictly as a function of time. The article relayed the results of destruction testing performed on USED slings taken from power plants, line trucks, paper mills and other locations. A majority of the slings broke below the necessary value to justify a 5/1 design factor.

The less than scientific conclusion of the testing was that synthetic slings lose strength as a function of time and I was mentioned, possibly to add credence to the incorrect conclusion by making the point that if shelf life were not valid, “Gelskey would not put the date of manufacture on all slings made by his company”.

The logic was incorrect on any levels. The so called experiment lacked many basic elements necessary to prove the hypothesis under what is accepted as the scientific method. The independent variable, time was not isolated.

The sample slings pulled to destruction in this study had been subjected to use, weather and environmental factors. They could have been exposed to overloading, chemical and ultraviolet degradation or perhaps were not manufactured properly.

We date and individually serialize our slings so that users and inspectors will have an exact idea of how long our slings have been in service. Our rationale was that despite appearances slings may be removed from service and destroyed as many are very inexpensive when compared to the cost of the items they handle. Simply stated, sling retirement may be an excellent form of cheap insurance.

When slings are stored for extended periods in conditions that do not exactly duplicate optimum storage conditions, sling strength may be affected. An example would be when slings in Eastern Washington (desert conditions) are stored outside in metal containers. Those slings can take on spring steel qualities and recoil to assume their wrapped condition. After many years slings stored inside under conditions that DO NOT EXACTLY DUPLICATE optimal storage conditions, can begin to exhibit a gummy or sticky finish.

We have on a couple of occasions pulled slings to destruction that were kept in optimum storage conditions: dry, dark, cool and free of mechanical and environmental damage. In all instances the slings broke above the 5/1 design factor. Both slings were approximately eleven years old.

The salient difference in the destruction tests done by Lift-It and the testing done in the early 90’s is that the Lift-It test slings were never used for lifting or subjected to any form of degradation. Under these conditions, the independent variable, time was indeed isolated.

In the early nineties when the non-scientific study results were published I was assailed by webbing and yarn producers.  I was informed on more than one occasion that synthetic fibers DO NOT lose strength strictly as a function of time. On one particular occasion, a fiber producer was extremely profane in making this exact point to me based upon extensive testing in oxidation chambers. Those results contradicted the incorrect conclusion made in the article. 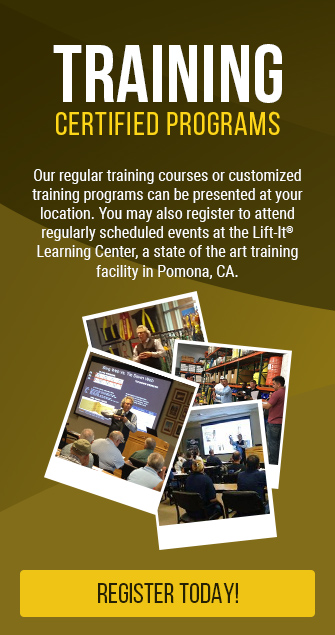